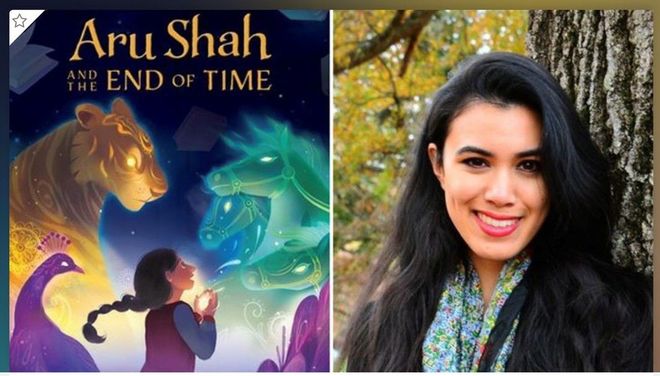 At the February iWRITE meeting, Club Advisor Phuong had mentioned about a Hindu mythology book releasing in March. The first of a triad under the label of Riordan Reads, Aru Shah and the End of Time was a book I wanted to read as soon as I heard its title. As soon as I got home, I told my mom about it and the book arrived as my surprise birthday gift! I couldn’t resist but binge-read this 340-page novel over the weekend, enjoying it with samosas and hot chocolate.
Aru Shah and the End of Time is a beautifully woven story. The Indian-ness of its details, like the enchanted vahanas, the animal vehicles of the Gods, and the American sass and attitude of Aru’s commentary blend together to make a stunning story, a book that will never be forgotten! The biting sadness at the realization that Aru had a mother that never seemed to truly love her, her helplessness at being called a liar for her entire life, and the pure, innocent thoughts of Aru in the most perilous of times are just one figment of what makes this book fabulous.
Aru Shah is a girl who can stretch the truth a bit. One day, she finds out that she is a direct descendant of the Hindu mythical heroes, the Pandava brothers. Her soul-sister of sorts, Mini Kapoor, a Filipino-Indian-American girl also has this revelation and the two join hands in a quest to save the world from the Sleeper, a demon whose evil army is asleep (hence the name). He wants to take over the heavens so Boo (Subala the Wise, Aru and Mini’s companion, who ended up in pigeon form – don’t ask how) and the Heavenly Council need true heroes to defeat the menace. Read to find out if Aru will save the world, or if we are all fated to fall into eternal slumber.
This Riordan Reads book is my favorite book of all time! This story of a quest with two Pandava sisters from other misters as protagonists is a book you won’t forget and its carefully crafted characters with their complex personalities are individuals you will want to meet!
This is the best book ever! 10/10 and an amazing read for anyone!